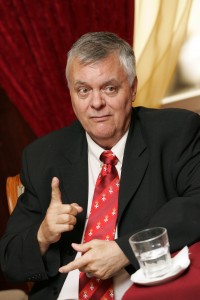 Today, NLPSuperFest announced that hidden NLP co-founder, Mr Frank Pucelik, will be an exclusive guest presenter at this year’s 2014 conference in October. All the way from Ukraine, little is known about the elusive founder, who has remained out of the limelight until very recently.

Frank recalls Richard Bandler, John Grinder and himself, as rebels. In the 1970s, they realised that “We didn’t like people telling us what we couldn’t do. All of us believed, that if you just figured out how to do something – you could do anything.”

Though staying out of the limelight, Frank has not been inactive since that time. He was also the Professor of Interpersonal relationships (Oklahoma City University), and has been a long-term consultant for the Peace Corps since 1998. Each year Frank Pucelik trains more than 2,000 middle- and top-managers of the most successful companies in the Ukraine, Russia, Belarus, and other CIS countries. Frank Pucelik also supports five rehabilitation centres for youth with drug addiction from Ukraine.

NLP is the study of human excellence and knowledge transfer. Frank will share his NLP expertise on the skills of modelling: the fundamental skill of NLP that can extract key components of how an expert works and thinks, and then modify those components so that they can be taught and used by other people.

Frank uses this to immensely boost any form of productivity – imagine a business replicating and passing on the most sought after skills of their top staff to all their employees, so that all staff are equally top notch. Modelling has been a secret weapon for top businesses that made it big.

Frank expressed his immense excitement to share his knowledge with us, as he also uses modelling to help achieving personal growth and clarity for an individual. And the best part? No experience is necessary to learn the modelling process – As a seasoned international trainer, he welcomes people from all walks of life to learn his craft.

Once lost, but now excitedly found – Frank heads down to Melbourne, Australia for the first time to teach modelling and the psychology of excellence, exclusively as part of NLP SuperFest. Along with a list of other high-profile trainers such as international best-selling author Jamie Smart and Alistair Horscroft, the NLPSuperFest is held at the Melbourne Convention and Exhibition Centre, on October 3rd to 5th 2014.

As a Fridge Magazine reader we have something special for you. I am pleased to say for a limited time only you can save BIG on tickets for this very special NLP event. Use the code fridgemagperk on the bookings & registration page and save up to $200! Check out the NLP Superfest website for more details on the event. http://nlpsuperfest.com/.

Dave Jenyns – How To Easily Systematize & Grow Your Business

Warning: Use of undefined constant posts_per_page - assumed 'posts_per_page' (this will throw an Error in a future version of PHP) in /home/hrmedia5/public_html/fridgemagazine.com/wp-content/plugins/hrm2-personal-functionality/includes/widgets/widget-popular-posts.php on line 33

Warning: Use of undefined constant meta_key - assumed 'meta_key' (this will throw an Error in a future version of PHP) in /home/hrmedia5/public_html/fridgemagazine.com/wp-content/plugins/hrm2-personal-functionality/includes/widgets/widget-popular-posts.php on line 34

Warning: Use of undefined constant orderby - assumed 'orderby' (this will throw an Error in a future version of PHP) in /home/hrmedia5/public_html/fridgemagazine.com/wp-content/plugins/hrm2-personal-functionality/includes/widgets/widget-popular-posts.php on line 35

Warning: Use of undefined constant order - assumed 'order' (this will throw an Error in a future version of PHP) in /home/hrmedia5/public_html/fridgemagazine.com/wp-content/plugins/hrm2-personal-functionality/includes/widgets/widget-popular-posts.php on line 36
Outsourcing Guide: The 5 W’s Speed Up WordPress: 14 Easy Ways To Decease Load Time Smart Business: The Ultimate IT Checklist for the Holidays 8 Webinar Tools Tested, 1 Ultimate Winner… Google vs Amazon: The Big Changes In eCommerce

Warning: Use of undefined constant posts_per_page - assumed 'posts_per_page' (this will throw an Error in a future version of PHP) in /home/hrmedia5/public_html/fridgemagazine.com/wp-content/plugins/hrm2-personal-functionality/includes/widgets/widget-popular-posts.php on line 64
How To Keep Great Tenants Happy What You Should Know Before Investing in Real Estate 5 Ways to Increase Your Productivity 5 Easy Steps To Retain Fantastic Employees Tax Dos and Don’ts for Your Small Business